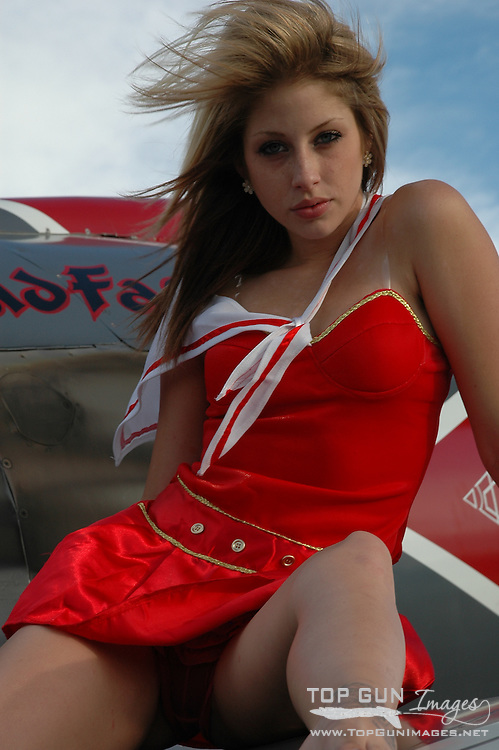 The History of Pin Up Girls Photography

The interest behind pinups and pin up girls photographs is described succinctly by one collector of pin up photography, who said something along the lines of, "You can't go wrong if you combine two of men's favorites: beautiful women and airplanes". Interestingly though, the popularity of pin up photography (and the re-emergence of the popularity of these images, as proven by companies such as Top Gun Images) is actually tied together with the history of aviation.

Pinups and Pin Up Photography

Pinups and pin up girls photographs are directly rooted in nose art of planes. Adding eye-catching paint schemes and personal insignias were said to originate from the Jagdstaffeln, the fighter units of Germany. The most well-known of the brightly-colored fighter German planes was the one flown by Manfred von Richthofen, otherwise known as the Red Baron. Eventually, the popularity of these colorful insignias made their way to the United States. Originally, the nose art of the fighter planes of US depicted images that were indelibly link with the country's culture, such as Uncle Sam's top hat and bison. Eventually, however, provocative paintings of pinups and pin up photography of women made their way to the nose art of planes. The sources of these paintings came from different sources, from the pinups and pin up photography of popular celebrities at the time (such as the flicks of Betty Grabel, Marie McDonald, Bette Davis and Ava Gardner) to popular men's magazines to starlets who actually pose for pin up girls photography. The classic pinups and pin up girls photographs depicted curvy women posing coquettishly while wearing inviting smiles.

While a lot of these images were provocative to the point of being erotic, the army allowed the use of these images, believing that this was a harmless way to boost the morale of the soldiers.  What's interesting is that the pilots didn't just choose these images randomly. There were also cases of pilots who had the images of their wives or the women they left behind painted on their planes to keep them focused on what they were actually fighting for. For a lot of the pilots, these women served as their own versions of Lady Luck, lucky talismans that would help them find their way back home. Some of these planes were even named after the women that were painted on them.

Eventually, pinups and pin up girls photos made their way into the bunk rooms of these soldiers. As with the pilots, pin up photography served as both the inspiration and source of luck for many of the soldiers, helping see them through the war with the thought that they would be able to go back home to their own girl, or at least find their own woman after they go back home.  Pin up girls photography allowed them to have something beautiful to look at instead of being forced to focus on the misery and ugliness brought on by the war. In some way, pinups and pin up photography and paintings represented home, helping the troops remember what exactly they were fighting for.  Feelings of romance, nationalism, and eroticism were evoked every time the soldiers look at these posters.

Eventually, poster art (also depicting pinups women) emerged that were military-inspired. While soldiers also were able to get their hands on these pinups and pin up girls photos, pin up photography also made its way to the homes of civilians. In fact, some of these pinups were even used to help get support for the war on the home front.  The popularity of these paintings and pin up girls photographs rose to the point that calendars, jackets, and other such items bore these images as well.

Nose art continued to be painted on to planes. In fact, some of the fighter planes of the US were decorated by paintings of these pinup women. Eventually, however, this type of nose art was banned after complaints were filed by the feminist groups. This led to many people, particularly vintage pinup collectors, believing that the days of the pinups are finally gone.

This however, wasn't the case, as the emergence of Top Gun Images and other similar companies showed. While nose art depicting scantily-clad women were no longer allowed, this didn't mean that the production of posters and pictures of women in military- and aviation-inspired themes were. While Top Gun Images uses cameras instead of paints to depict these pin up girls, it is still able to channel the artistic nature of the photographs that served as the inspiration of the soldiers back in the days. In fact, Top Gun Images tries to be as authentic as possible, by making these women appear with the planes used during the old wars, such as P51 Mustangs, P40 Warhawks, and Super Corsairs.  The pin up girls themselves channel the coquettishness of the women in the old pin up girls photographs. While less clothed than a lot of the old posters, they still nonetheless channel the sexuality and sensuality that were evoked by the old pin up photography.