When Betty Grable's 20th Century Fox Technicolor musical romantic comedy motion picture, Pin Up Girl blew up the screens during World War II in 1944, the efficacy of the popular image of womanhood in pin up girls as a sex symbol was well loved at home and on the battlefront. The ubiquitous pin up girls that graced the lockers of soldier G.I., the exterior of bombers and of course, the silver screen gave America a shared site of consensus while the men went off to war. 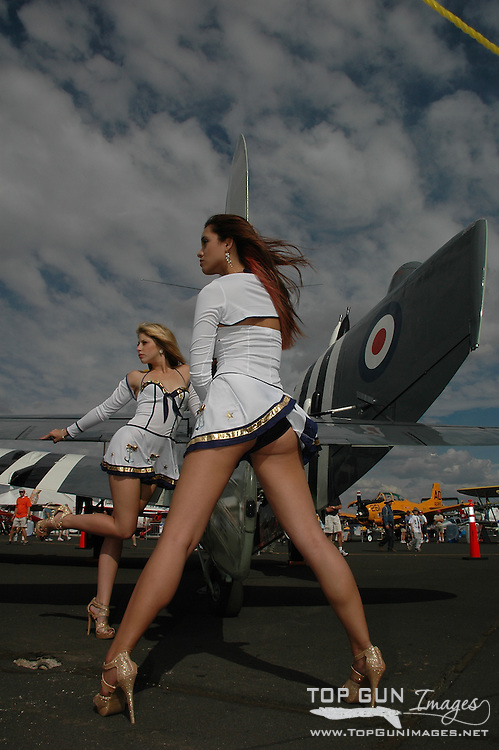 Loved for their pin up girls work, models like Grable soon went on to become celebrity bombshells. The invocation of sex as a common ground of patriotic value emerged at a time when tensions in public consciousness were at heightening. War was big business. Sex as a moniker of capital and social recognition soon took on a celluloid life of its own; ultimately transforming pin up girls images of sexualized womanhood into a new culture of participation and protest.

History of introduction of pin up girls as icon 1930s followed the first wave of Women's Liberation in the 1920s. When the flapper styles of an independent sexualized woman emerged on the jazz scene of the Harlem Renaissance in New York, the love of this new found freedom spread like wildfire on both sides of the Atlantic.

When the inter-war years saw early formation of pin up girls as a popular culture formation in the Gibson and Varga girl imagery preceding WWII, admiration resulted in market leadership in press. With over nine million copies of Varga sold, it is not surprising that pin up girls model's voluptuous bodies were transferred to nose art on WWII bombers. Demand for Varga pin up girls images remained high throughout the war from 1942 to 1946.

Walter Benjamin's seminal work on inter-war commodities and photographic representation reveals where military incorporation of pin up girls photography met its intent: a phantasmagoria or dreamscape of advertising imagery by which authoritarianism is both reified and obscured.

Advertising imagery in the context of Europe's inter-war regime(s) served as an early foray into the landscape of capital, political ideology, and body as technology of the market. Novel use of female models fostered radical departures from those formative logics through art photography, yet certainly transformed through his diligent dedication to alternate images of capital. Modernist photographic advertising was common ground to authoritarian praxis in capitalism; through the pin-up the tenets of History 'literally body forth'.

If pin up girls photography was of the dream girl in the wartime dreamscape, it is perhaps most articulated in juxtaposition with another popular photographic movement during the period, Realism, and its wartime record of prisoners and other less fortunate.

The deployment of women's bodies in pin up girls photography used for the spread of militarism was predicted by artist emergent from the Futurist movement just prior to the Surrealist shift in visual expression. The pin-up's universal appeal opened the door on the use of military propaganda as a trope in photography. Feminine realism in photography served to translate the dynamic, machine like impetus of desexualized forms of womanhood also circulating at the time such as Rosie the Riveter in convergence with the pin-up in a coherent narrative of protectionist representation against mass violence not seen in media prior to that moment in history.

Pin Up Girls Photography and Images in World War II

This new geography of American womanhood, either explicitly or implicitly, constituted a nexus for translation between sexed difference to sexualized and objectified subject for public consumption writ large. Mediated representation, and its replicated body doubles came to fill the American imagination with metaphorical 'terrain' of a beautiful bomber.

A landscape of duplicitous embodied difference; now structured according to the flexible demands of capitalization wherever it may wage its (His)Tory or its war. Indeed, bomber nose pin-ups are female provocateurs. A photographic body most dangerous, yet most desired in her 'perfection' as a military 'expert' and patriot; the pin-ups' discrete knowledge as a harbinger of a beautiful bomb without age, she herself is nothing more, some critics would argue, than a candy coated 'death head'.

Endorsement and protest of the images in the early to mid-twentieth century by women is a lesser told story about counter supporters of the pin-up art movement and its avid followers. If illicit defined the specter of 'bodily shame' put forth in protest of the pin up girls photography model by women seeking a feminist detraction of overwrought sexuality in the public sphere, it was in the sake of post-Victorian retention of what they argued to be a force of corruption of the morals of America. Needless to say, the popular pin up girls photography model did have its critics.

If the pin up girls photography model was meant to display a standard in womanhood what of the sexual incorporation of images of femininity and youth as a site of political consensus - a bulwark against enemies defiant? Visual objectification of women by men in the history of cultural production is nothing new. Subjection is most persistent to gender relations throughout history.

The modern male gaze has also never been confined to a single gendered dichotomy. As WWII bomber culture seems to indicate; the boundaries of geographic location. Since the latter half of the twentieth century, ownership of the privileged gaze has quite consistent to European and North American male authority and by extension national publics where their perspective is most represented. The history of the pin up girls photography model seems to fit this calculus. Investigation of the school of Wold War II pin-up art and pin up girls photography as a comprehensive collection of artifacts reveals much about the past. It is probably valid to suggest that more than a new culture of sexualized imagery was at stake.

If pin up girls photography models and their imagery challenged traditional American gender relations they did so at a time when vast transitions in capital, consumption and consensus were underway.

For some women it was a blasphemy in the face of all they had worked for; for others an opportunity to fly first class. In all cases pin up girls photography models were victorious babes.